The boys had Friday off from school so it was a great opportunity to head out for a longer fishing trip. The forecast for the 2 days was mostly cloudy and 4-6 mph winds early then rising to 13-15mph in the afternoon. With that forecast I was very excited to fish the lake!

We arrived late Thursday night and by the time we set up camp there was only 10 minutes to fish. I was lucky to land one fish and that was it for that day.

The next morning was promising due to the great weather forecast. Turns out that it was mostly cloudy and no wind! I woke up at 4:45am to put the ladders out on our spots. I waited for one hour before sunrise to fish. I figured if I did well, I can go back to the trailer and wake the boys up. That morning I landed a couple fish then headed back to shore to wake the boys up. By the time they got up and wadered up, the bite was already slacking off. I landed 6, Michael got one and Matthew got bit but no fish landed. The weather stayed calm all day. We did finally get some cloud cover but that did not help the fishing much. The forecast called for 13 mph winds to pick up at 4 pm and that never materialized. I sat in front of the trailer looking out at the flat calm water WHILE retrieving the forecast again on my phone. It STILL said ” Nixon NV 13 mph winds with 18 mph gust”. REALLY??? I’m right here and there is not a breath of wind. This place is like the Bermuda Triangle weather wise. Strange stuff happens here.

That evening we got a few more fish but nothing to brag about.

Next morning was also suppose to be 4-6 mph winds but at 6am it was flat calm. Michael landed 2 and lost another one. Matthew hooked one and lost it. I landed 7 but all relatively small fish. All our fish both days were caught on white and chart. tadpoles.

At 8am the weather was appearing to be bluebird skies and calm so we decided to pack up and have breakfast at Cabelas. Still a fun trip but I learned now to never trust the weather forecast for Pyramid. 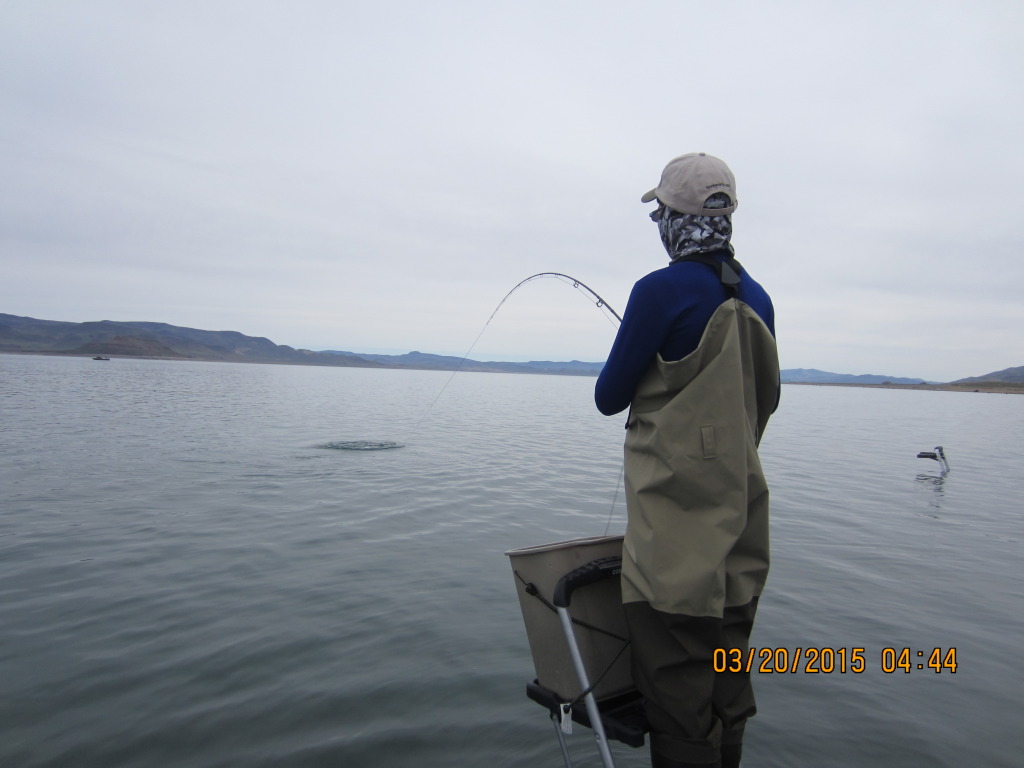 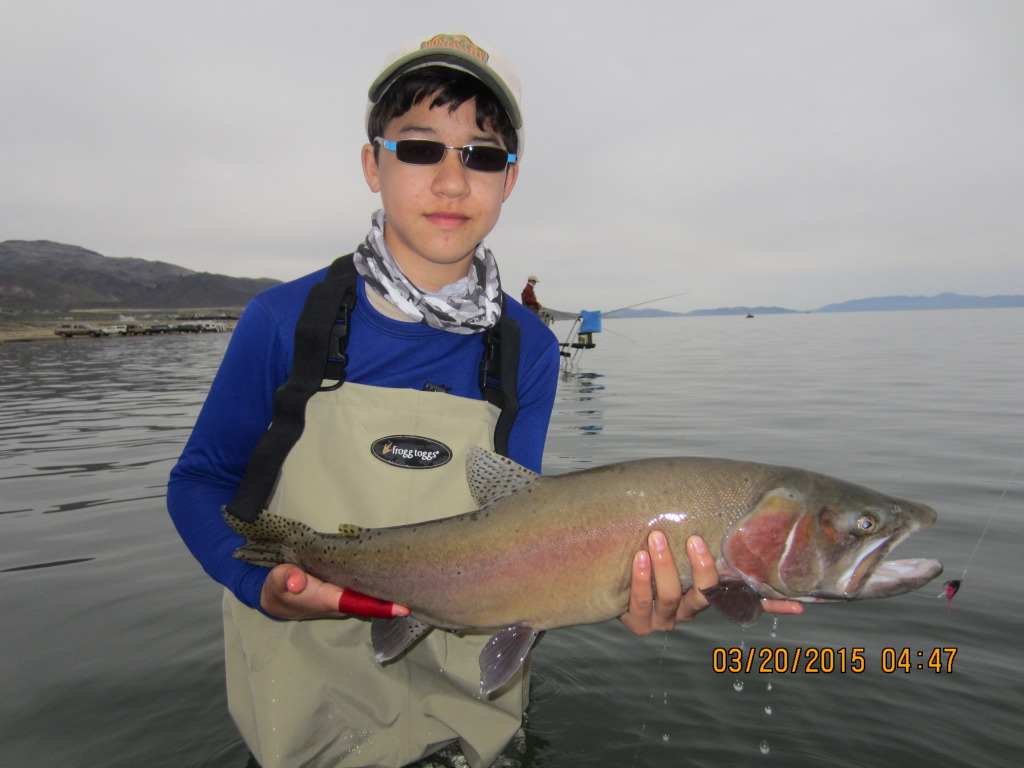 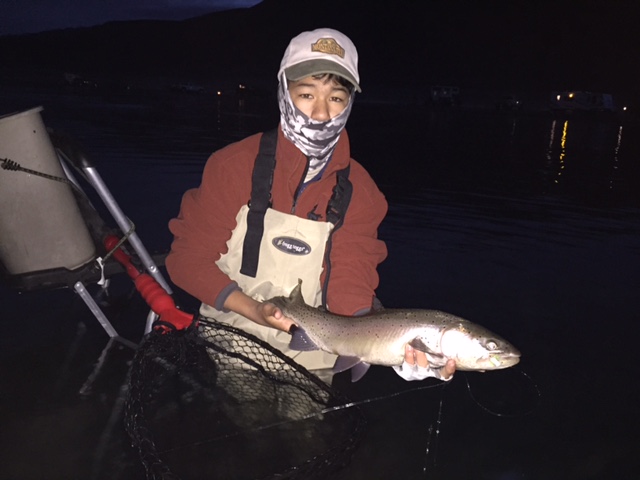 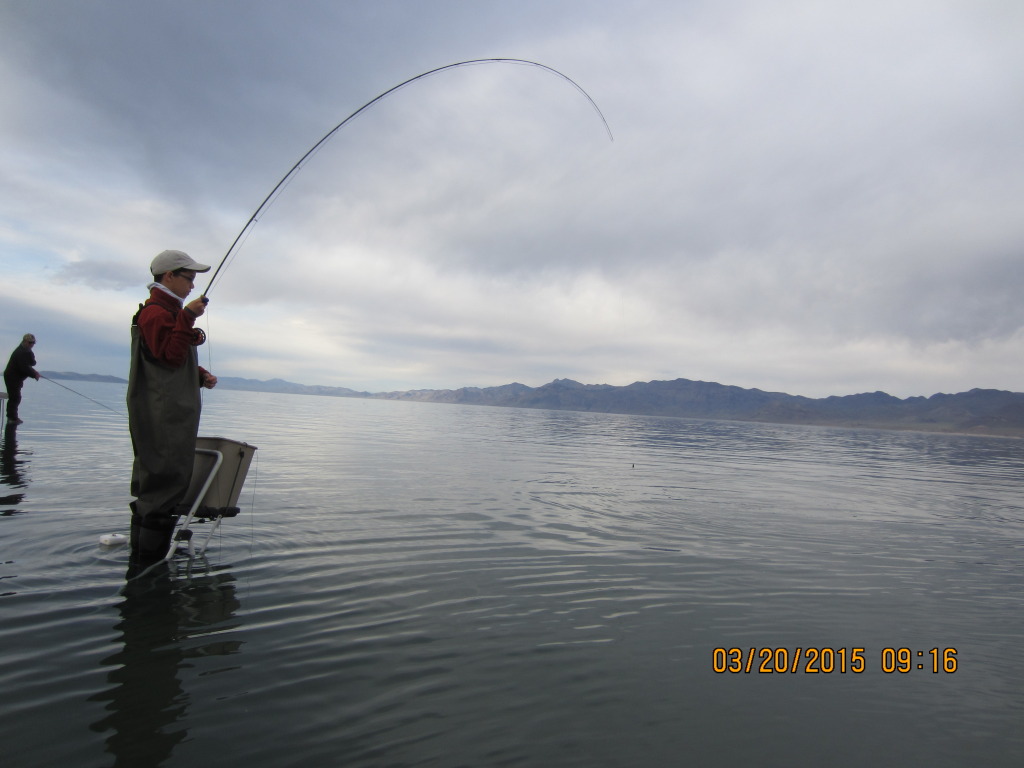 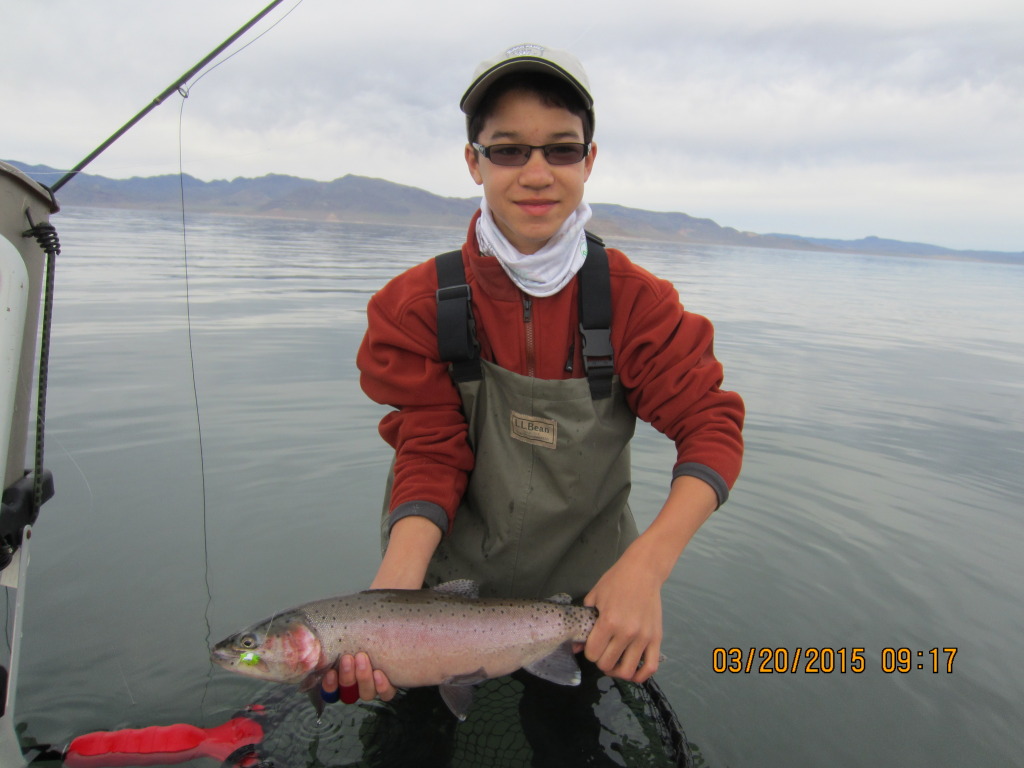 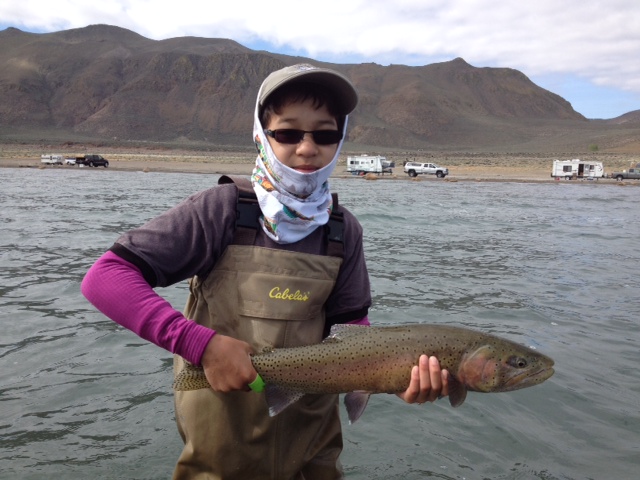 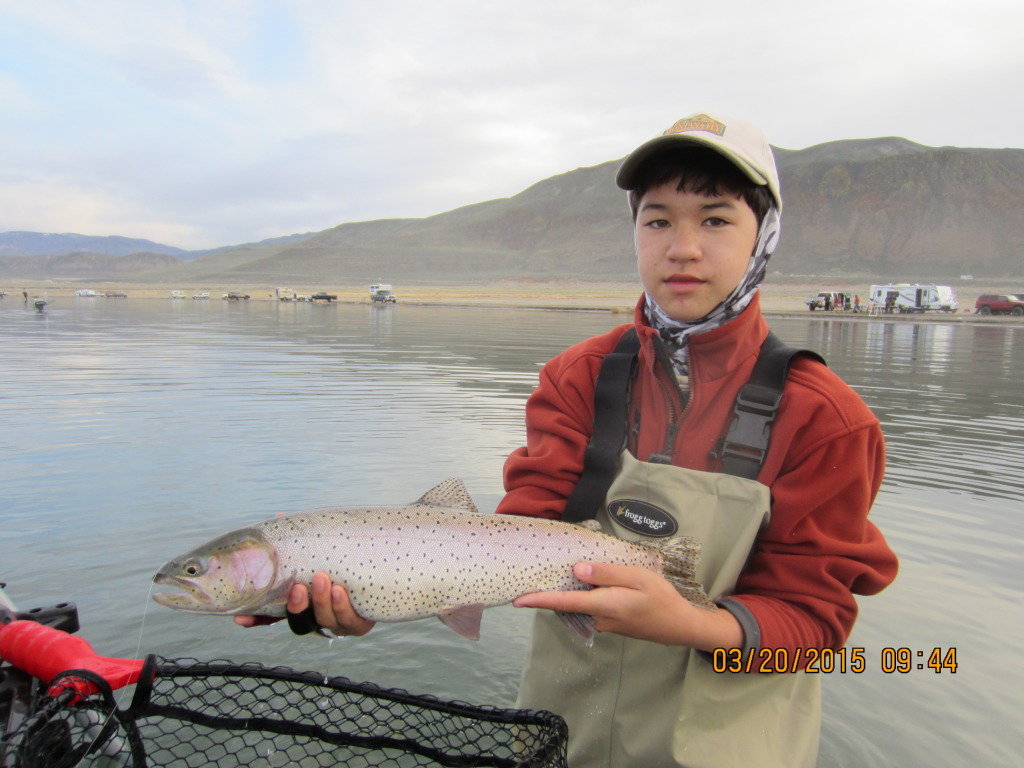 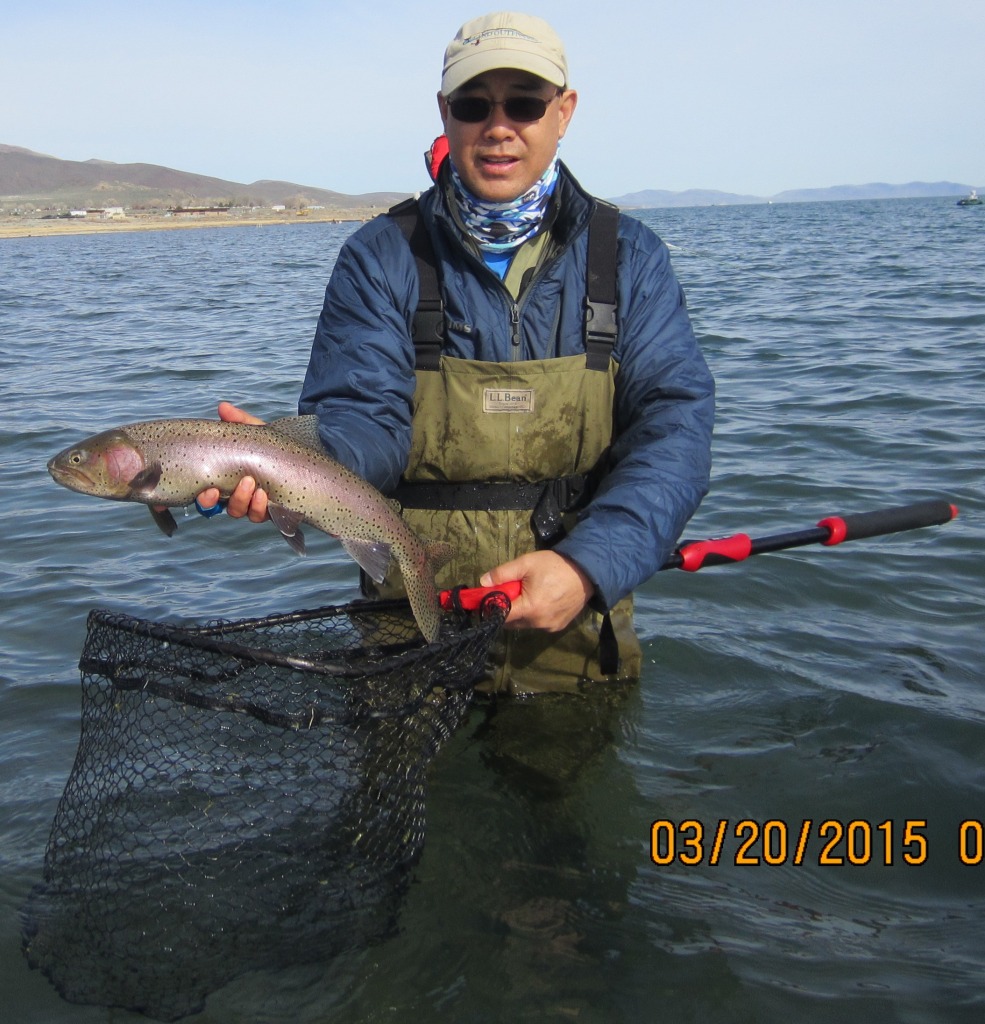 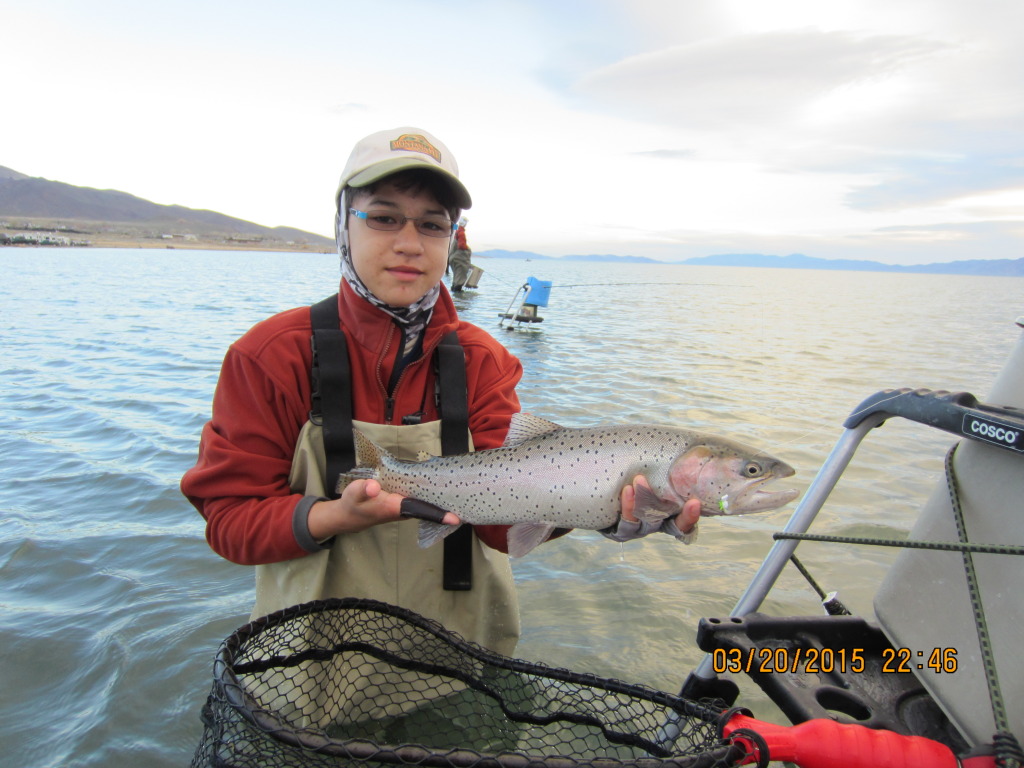 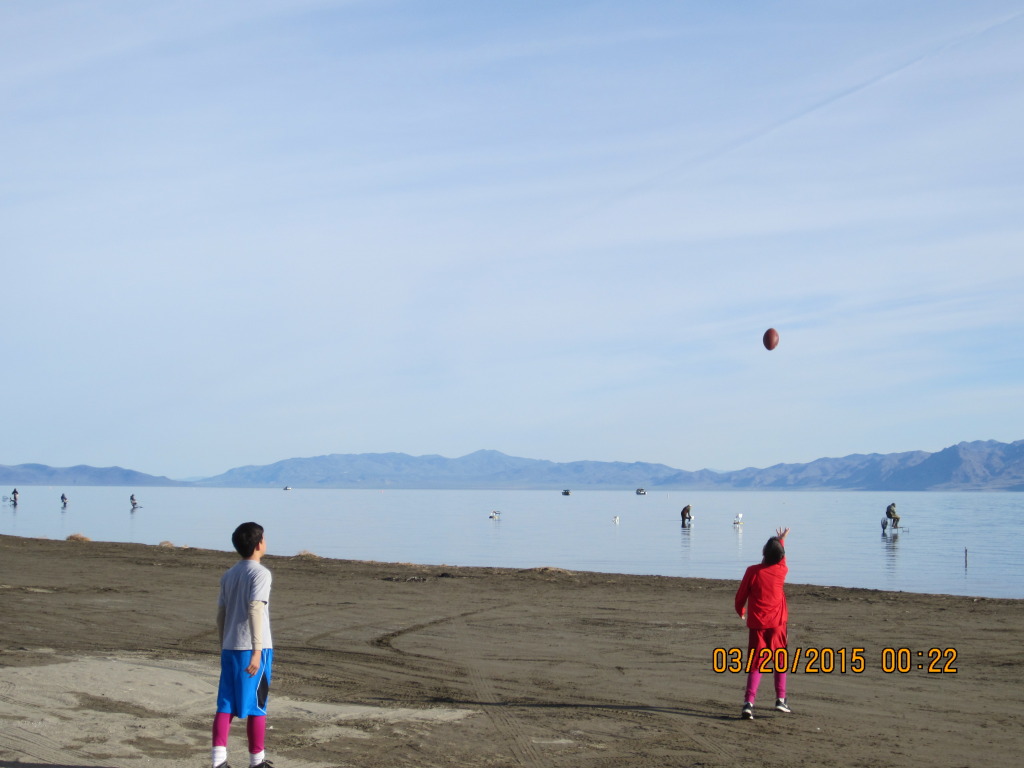