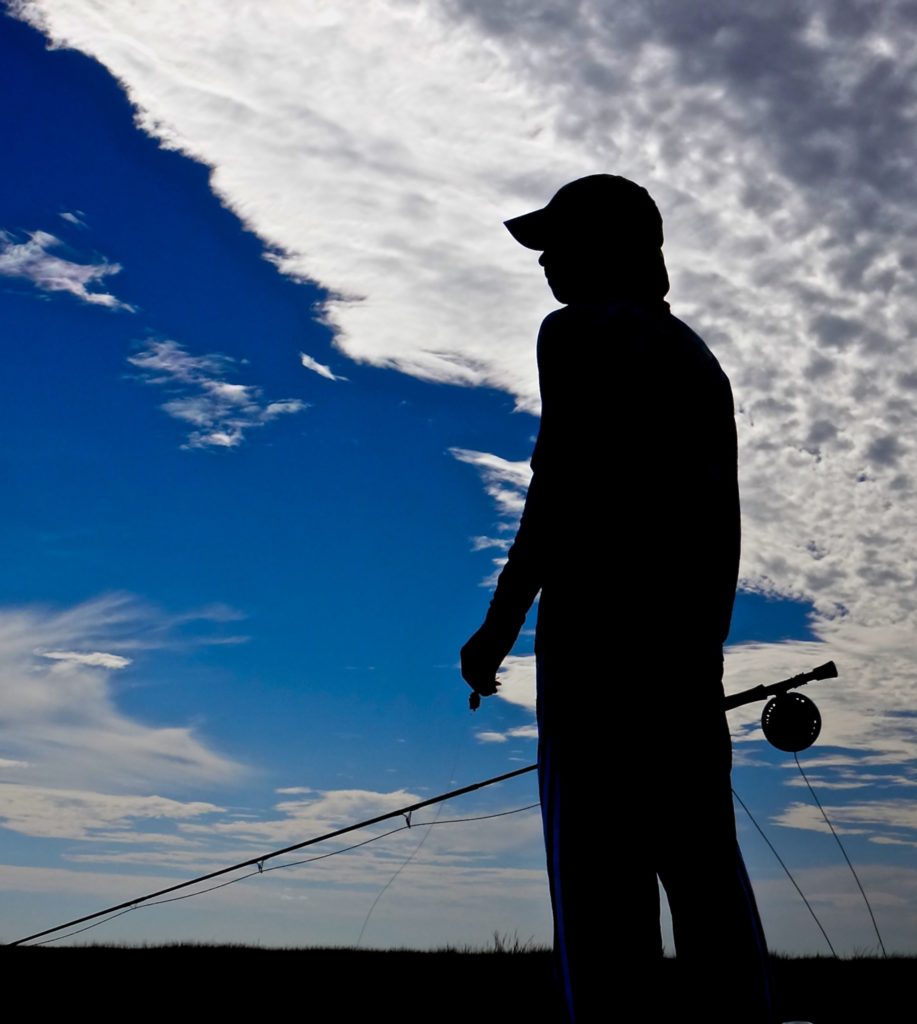 This trip has been on my radar for three years now. I was last there 2013 with Melanie and my staff for a dental convention and met Meng and Gina there too.
The gals attended the convention classes and Meng and I fished for redfish! No brainer right?
We had booked a couple days with Capt. John Iverson and a day with Capt. Greg Moon. Our day with Capt. Moon was canceled due to bad weather.
During the fishing day with Capt. John, I discovered that he was willing to take 3 anglers on a fly fishing trip. I had asked numerous LA marsh fly guides if they would do that and all said no. Capt. John was OK with it and since that day I have been wanting to get the boys out there for some big bull reds!
I actually booked last year during Thanksgiving week but it was a full moon right in the middle of our fishing days so I had to reconsider. This year we had a good moon phase but the tides were terrible. I took the chance and booked anyway. Results below…….
We arrived Tuesday afternoon and after checking into our hotel we were READY for a Louisiana meal! Acme Oyster House was only 3 blocks away so off we went. I have not had better oysters than the ones from Louisiana. The boys and I split 2 dozen ( one dozen raw and one dozen BBQ) and they were fantastic. We ate shrimp and fish PoBoys and it was delicious. It was so good that we went back for dinner the next night! Out of all the places to eat in the French quarter we went back to Acme ( we ate 3 dozen that night). That’s how good the BBQ oysters were…. so we thought…more on that later. 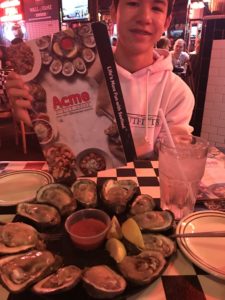 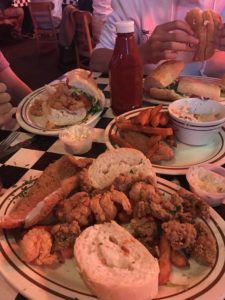 Every morning our guide would pick us up at our hotel on Canal St. That was a huge convenience not to have to rent a car. We would then head to the “guide hang out Cafe” called Penny’s and eat breakfast and purchase lunch for the day.
Our first day fishing was very slow due to tough conditions. We had no sun and no tide. At least we did not have wind. In the marsh if you have the “Holy Trinity” (no wind, sunny skies and good tidal flow) the fishing would be spectacular. Those conditions are a rarity. At least we had no wind that morning.
We saw fish but by the time we saw them they were literally in front of the boat or beside the boat. They would spook off and leave a huge “puff” of marsh mud in the stained water. The boys were able to get a few casts at some fish but the boat was just too close. It was Noon when Michael finally hooked and landed the first fish. His first bull redfish that weighed in at 19 pounds. Smiles all around and some relief! About an hour later Matthew hooks up and it’s a significantly larger fish. During it’s third run, it must have rapped around a very sharp underwater object. It frayed and cut through our 50# butt section.
On and gone! That was it for the day, two hooked and one landed. 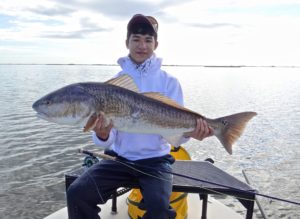 The next morning Capt John suggested we fish the other side of the river which is a completely different looking area. We headed south east out of Nawlins towards Buras/Venice. Since it was Thanksgiving day, we could not find a place to stop and get breakfast and lunch.
It looked like we were going skip both until Capt. John suggested going to Woodland Plantation. It is a well known bed and breakfast where many fishermen stay. It was right on our way to the boat launch. We stopped in and the cooks made us a delicious southern breakfast of scrambled eggs, bacon and shrimp and grits. We ate it all up! 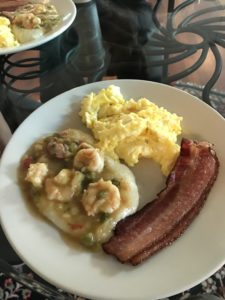 They made us a hearty lunch too and thus saved the day. The gals there are so sweet and friendly.

An hour later we were in the marsh fishing. This day brought mostly cloudy weather most of the morning. However the fish were a little more active due to very calm conditions. Despite the tide even worse than the day before the fishing was “incredible” according to Capt. John. The reason was the lack of wind. Even though there was no sun to see the fish in the water, it was so calm that we could see every little disturbance the redfish made.
The boys hooked 8 and landed 7. Matthew broke one off due to a nick in the leader.
The size of the fish that day was impressive. Matthew landed two 29 pounders and a 21. Michael landed a 24, two 19’s and a 9-10 pounder. 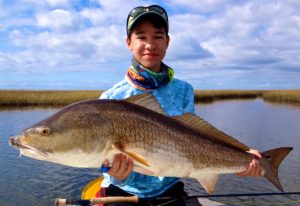 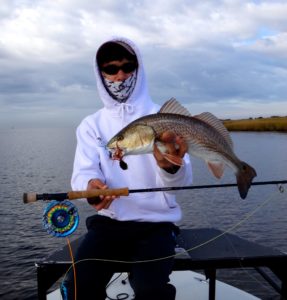 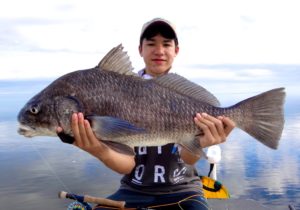 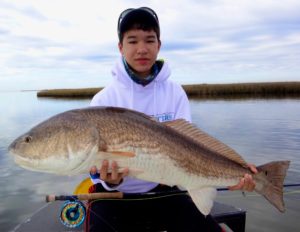 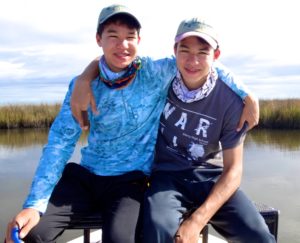 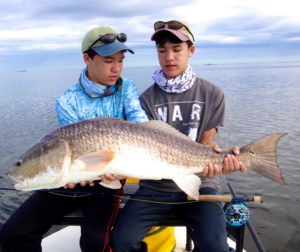 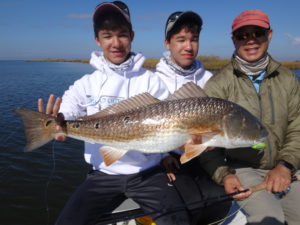 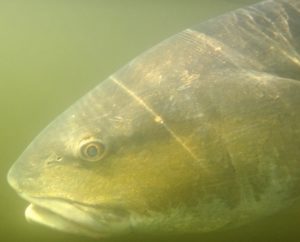 We quit a little early since it was Thanksgiving day and we needed to get to dinner early at Estella’s to beat the crowds. We all ate blackened redfish with lump crabmeat and creamed spinach. An appropriate “tourist” Louisiana Thanksgiving dinner. Of course another trip to Cafe du Monde for some tasty beignets after dinner was also appropriate. 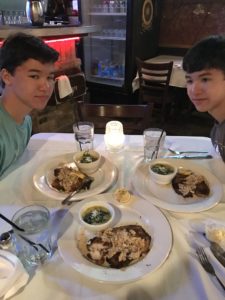 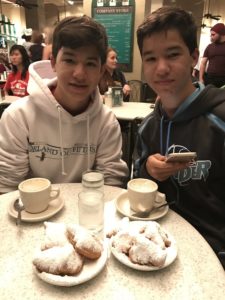 Day 3 brought sunny skies all day! However there was a stiff breeze that gusted to 15-20 mph at times in the morning. We found areas to fish on the lee side of the marsh where it was somewhat protected from the wind. We did not have our first hook up until 11 am. Michael had a great day with 4 fish landed and one if them was a brute 30 pounder. Matthew got on the board late but still managed to land a 21 and 25 pounder. 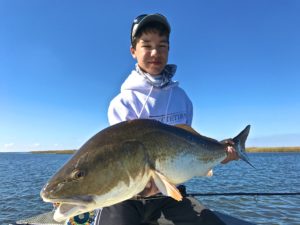 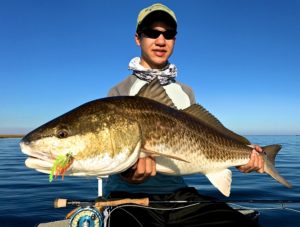 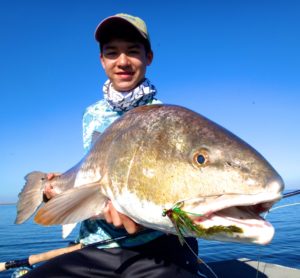 We fished until we lost our light on the marsh (3:45pm). Our near two hour commute back to the hotel gave us plenty of time to reminisce about our trip.
Since we raved about Acme Oyster House, our guide suggested to try Felix’s Restaurant and Oyster Bar right across the street. What a great suggestion. The best BBQ oysters ever! We ordered two dozen raw and two dozen BBQ oysters and devoured them in what seemed like seconds. We could have easily ate a couple dozen more. So now we have to say Felix’s is the bomb especially their BBQ oysters. Acme was great but this was BETTER! 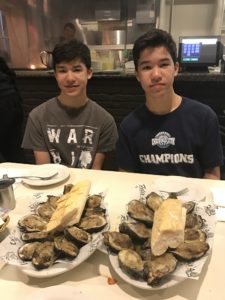 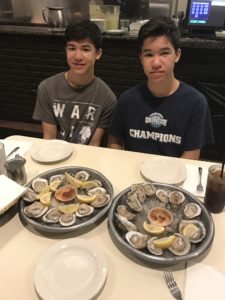 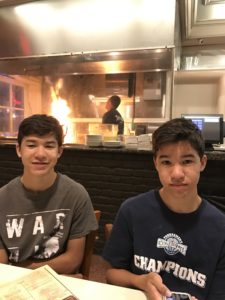 Our flight did not leave until 1:30pm the next day so we slept in and found a “hole in the wall” breakfast place down the street called Jimmy J’s. There was only 8 tables inside and a line forming outside waiting to be seated. I had a seafood omelette, Michael had Eggs Benedict Ranchero and Matthew ordered their signature Biscuits and Gravy topped with eggs. We all thought the meal was superb. What a great way to end a boys trip to a fishing and food Mecca. 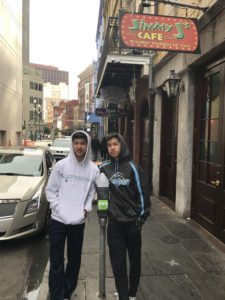 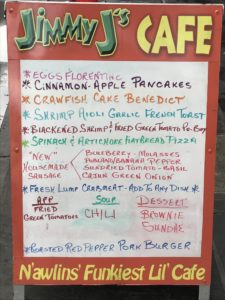 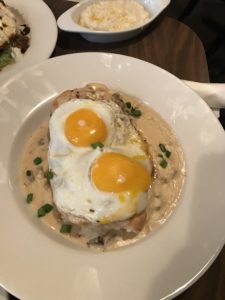 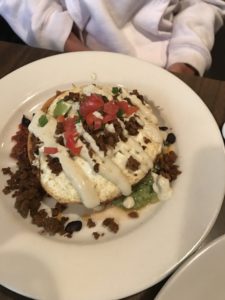 I asked the boys on the flight back what they would rate the trip. Both said “10” with out hesitation.
A few side notes:
-According to Capt. John “bull reds” is a term used to describe large redfish. The big redfish are all female! The males typically don’t get larger than 15-20 pounds.
-Only the males “drum”/ croak.
-Small black drum tastes identical to redfish.
-The fishing conditions ” Holy Trinity” is seldom seen and it mostly occurs on Capt. John’s day off :))
-The Louisiana oysters are less briny and meatier than their cold water cousins.
-BBQ oysters need very hot flames engulfing the oyster to keep the oyster from shrinking. Hard do it on a gas grill.
-Bull reds eat just about any fly presented to them. I tied 14 different flies and brought only one of each type. I did not want to lose a bunch of flies in case TSA confiscate them. –We did not check any bags this trip. All carry on including my rods and reels.
-The bigger the fly the better it seemed this week.
-Color of flies did not seem to matter. We used drab colors all the way to bright orange and chartreuse. Didn’t seem to make a difference.
-Had one 1/0 Fly Shop hook straighten out a bit. Note to self…use strong hooks next time.
-Out of 16 fish hooked this trip only one fish (the very first one), took the boys into backing. They hooked 5 fish over 25 pounds an none exposed backing.
-Capt. John said the smaller fish ( 15 pounders) take the longer runs. The big bulls just play tug of war.
-We used 7-8 foot leaders with 30 pound tippet on a Orvis Helios 2 9 weight rod.
-I set the drag pretty tight for the boys so a VERY smooth reel had to be used. Our Abel striper reel the boys won at the Striperfest a few years ago performed flawless.
-The reel was loaded with a Rio OBS WF9F.
-When there is no wind, the biting bugs come out by the gazillions. Have bug spray handy.
-Capt John is a sight fishing purist. He really likes to have his clients get fish sight fishing. That said, I’m confident that the boys could have hooked a few more fish each day if they were allowed to blind cast during unfavorable conditions.
-I did not fish at all….and still loved it! I did participate fully with the food consumption.

Since I did not fish I was the official photographer and videographer on the boat. I’m not very good at editing videos like Meng. His are phenominal. These are VERY raw and rudimentary.