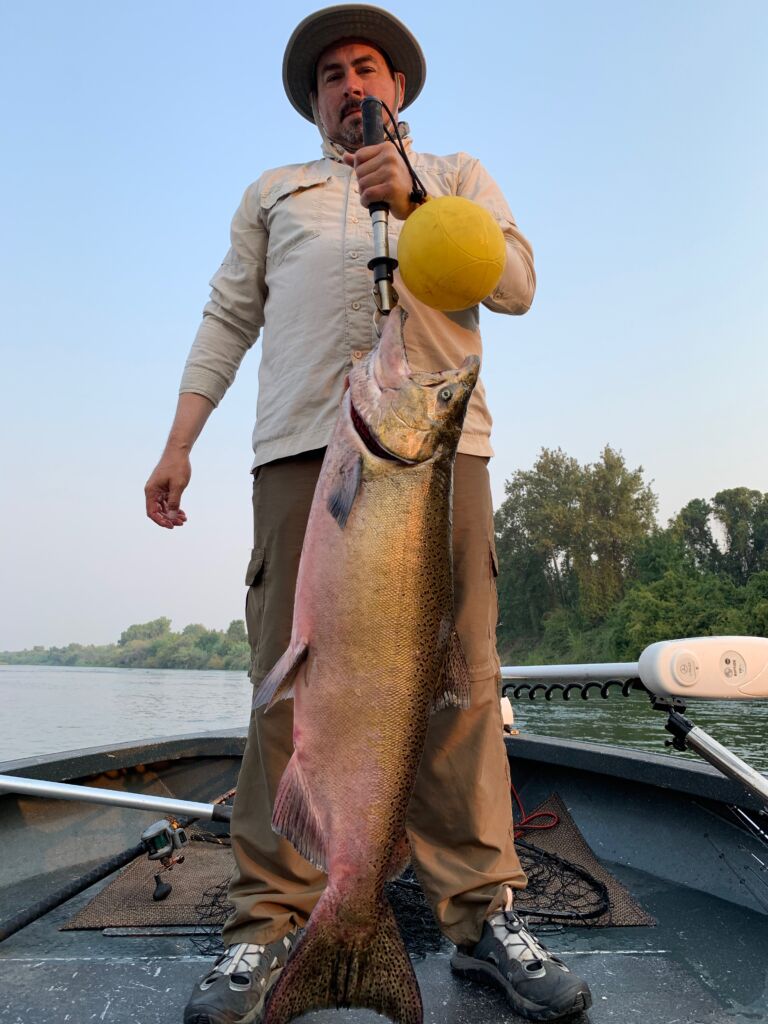 The DFW predicted well over 300,000 salmon returns this year. How they know that I have no idea. They have been wrong multiple times but they keep predicting. They did not predict the salmon collapse 10 years ago. So last winter when they predicted a run of 300,000+ fish for fall of 2020, I was very skeptical. Even though the season does not end until December, it’s virtually over now. They have dropped the water levels so low that it’s very difficult to launch boats. I’ve fished this area consistently for 30 years and have never seen the water below 4200 CFS. It was 3600 CFS as of this writing. 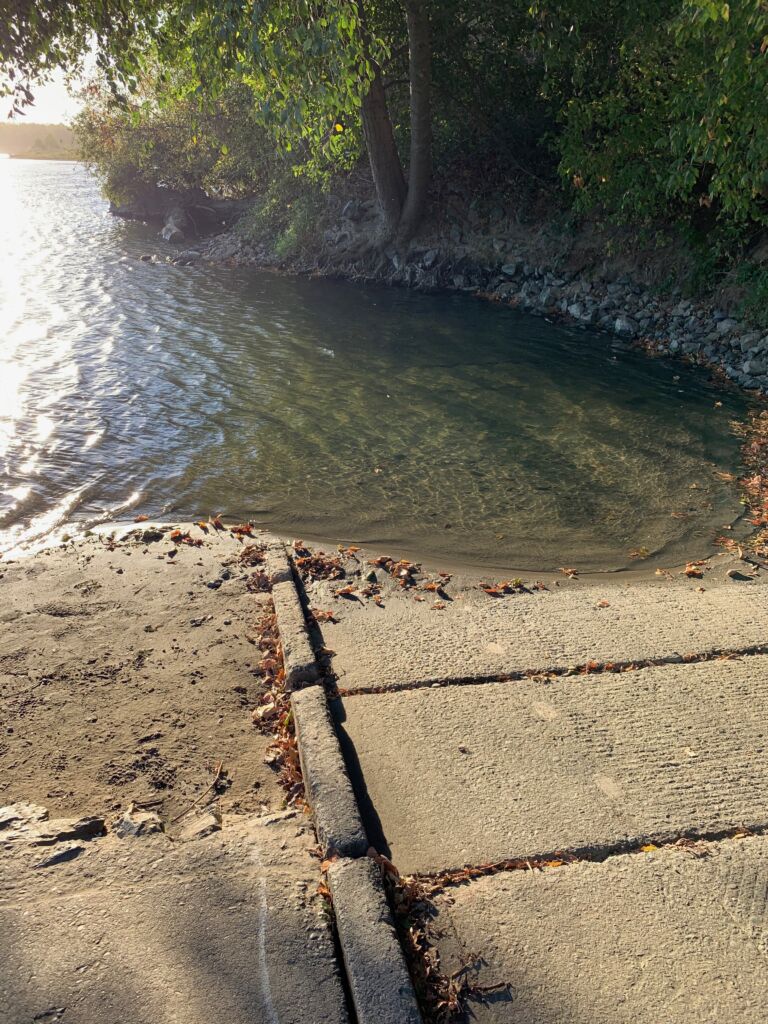 As for the salmon counts, the “official” numbers are not in yet but as a group of guides in this section of the river, we all agree it’s the worse season ever. Even worse than the year it collapsed. We actually caught more fish that season. 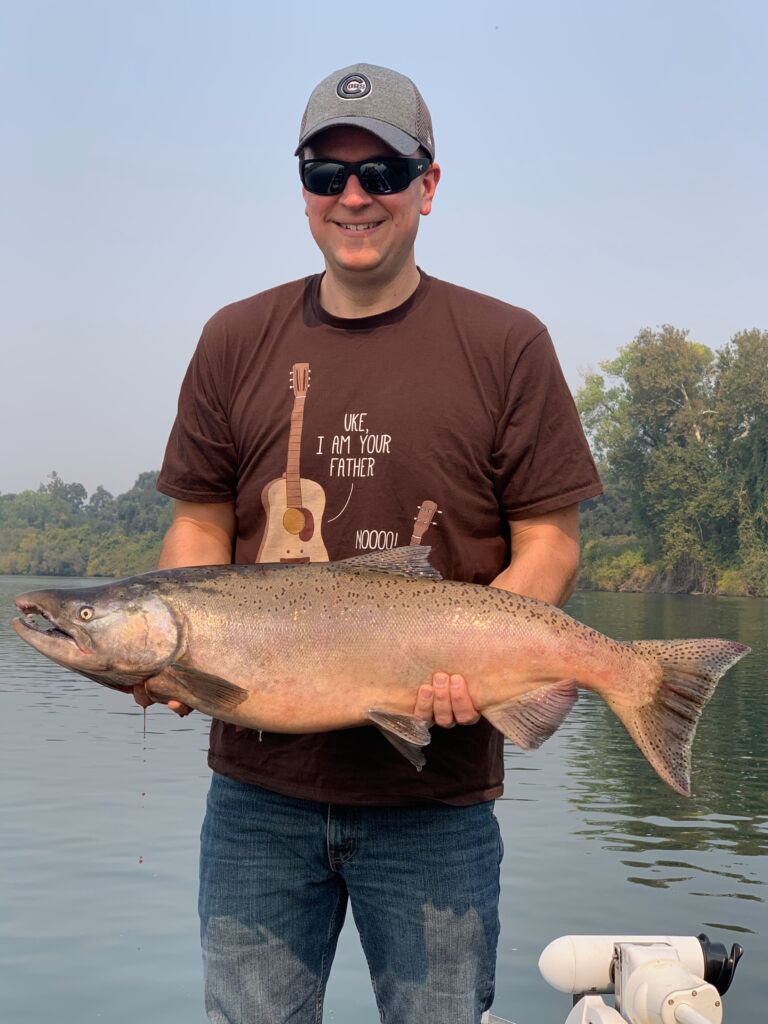 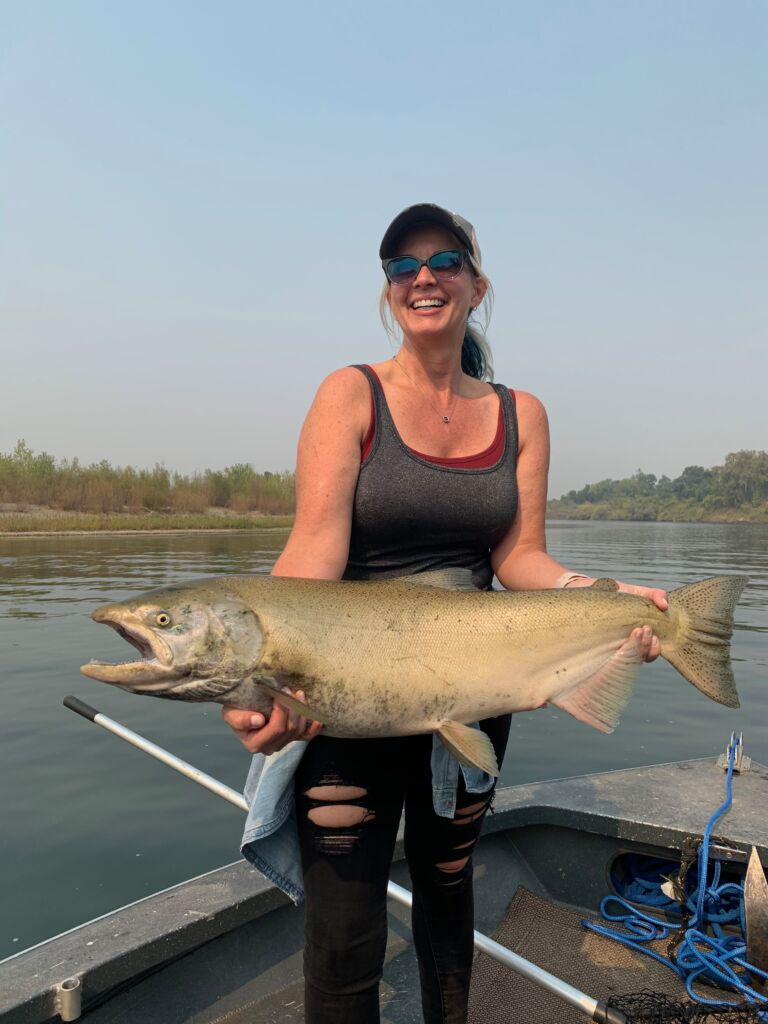 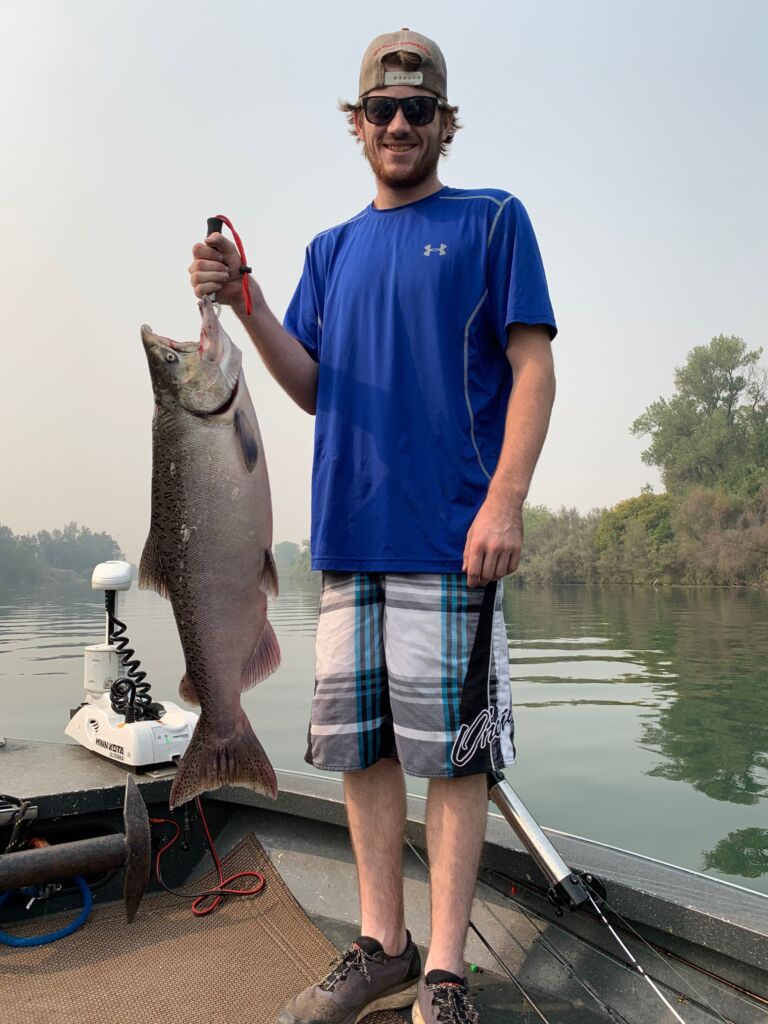 It could be the fish were here, but due to the very hot summer, very warm water, very low water and lots of fires that caused lots of ash fallout could have put lock jaw on these fish. 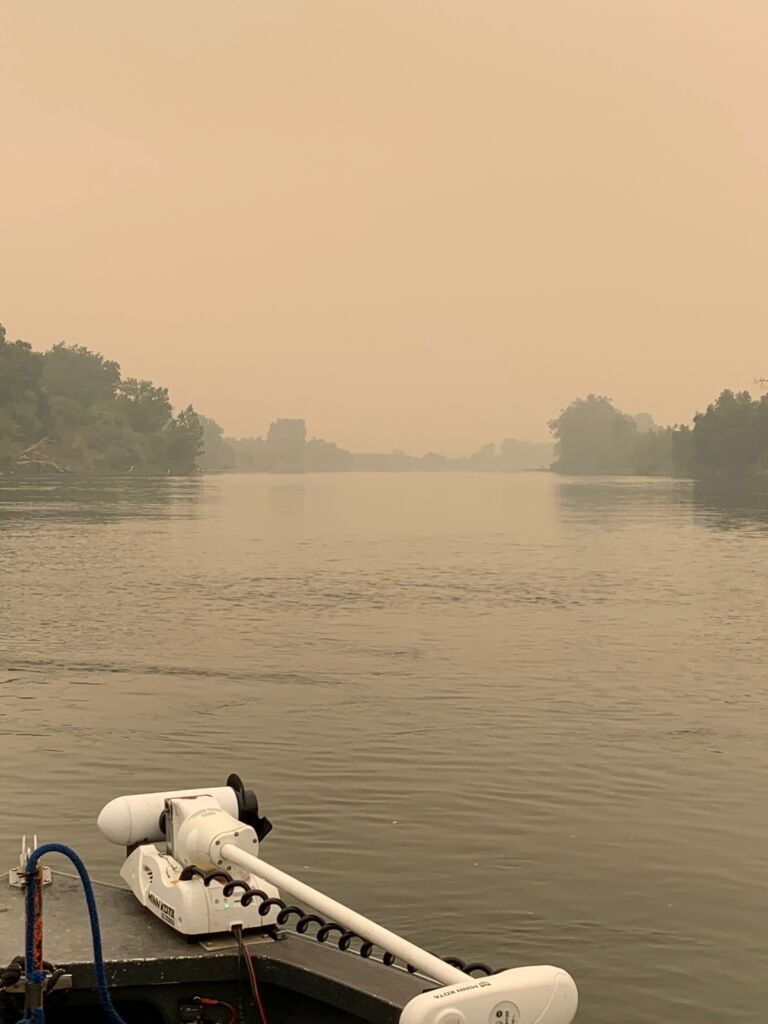 Last year my boat landed 45 salmon and it was a very slow year. This year only 19. Good years are 300-500 fish a season. The full time guides get 500-900 a season sometimes more. I stop fishing when the fish turn too dark to be good table fare. However we got into a few late in season that where really fresh. 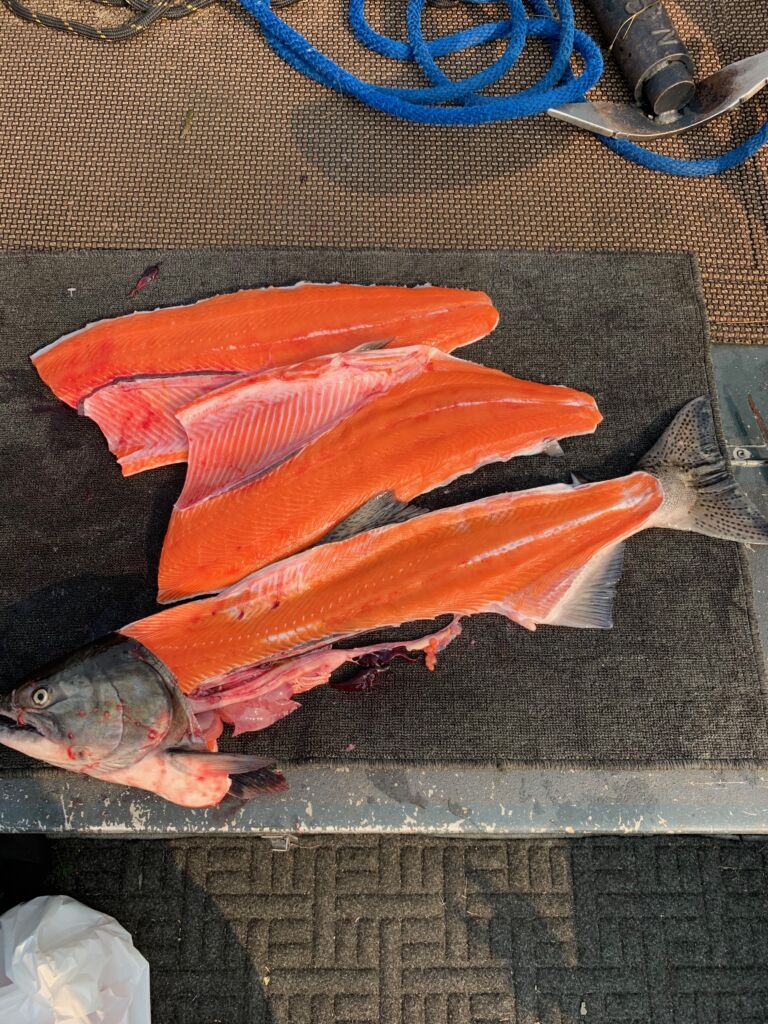 Lots of clients ask what is the biggest salmon I’ve caught on the river. A long time client and one of my first customers from the Millpond in Cupertino, Frank Clohan, landed a 56 pounder. A local client Seth Burreson landed a 54 and a group of guys that came out from Texas, one of the guys (Hardy), landed a 52. My personal best is this fish. Not sure what it weighed but it was every bit as big as the others. Just for scale, the other fish posted here are 15-28 pounds. 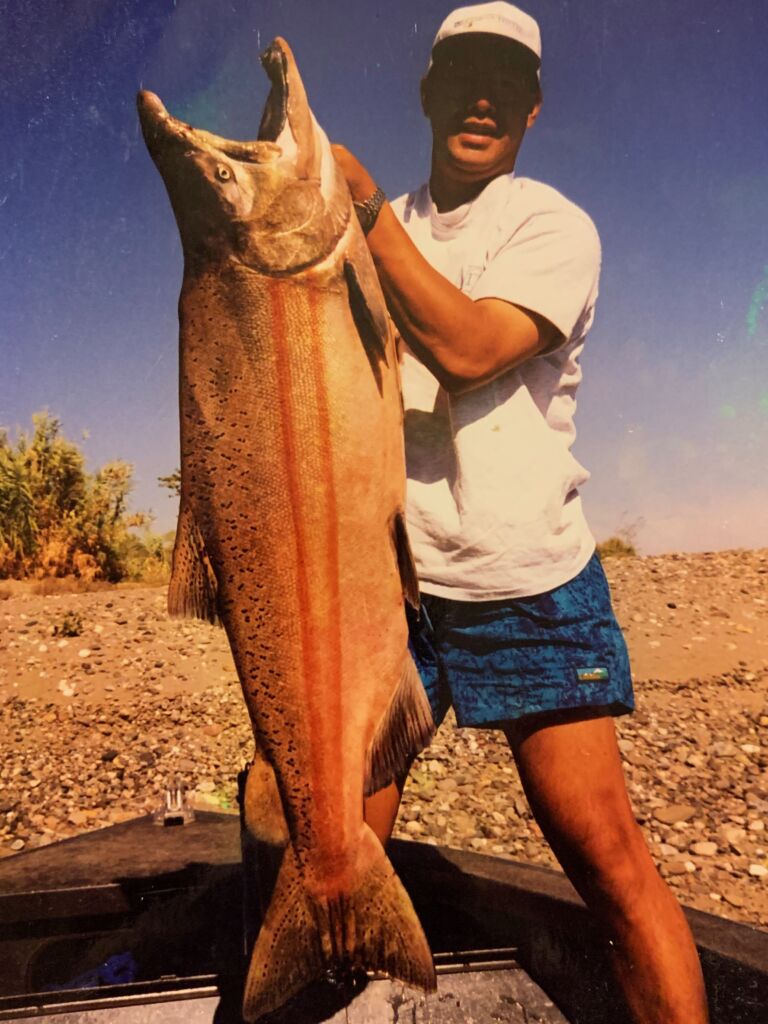 If the “official” numbers are as low as we think, there’s a pretty good chance the salmon season will be closed or altered in the future. This years’ run will seed the run in 3 years so if few fish this year….. you get the picture.