We are back from our first ever Cancun trip. What a whirlwind trip. It all started out at 2am Monday morning. We left for the airport at 3am and after parking the car, arrived at the ticket desk at 4:50am. All was well and the kids were anticipating a fun flight to Cancun…. THEN…it happened. The gal at the ticket counter said “You don’t have tickets”. I said that is impossible, I called to confirm everything last night and I was even given our seat assignments too AND I have an email here that shows my ticket number and confirmation number for this flight. She said there was a mistake at AA Advantage and somehow the ticketing was not set complete and we have no tickets. Are you kidding me?? To make a long  (and incredibly frustrating, irritating and maddening ) story short, we missed our flight and rescheduled for the next morning. To see the looks on the kids face when they were told we had to go home was so sad, not to mention how mad we the parents were.

We finally get there late Tuesday night. We were all incredibly tired from waking up at 2 and 3 in the morning the past couple days so we looked around the hotel for a little bit and called it a night. We lost one day of tarpon fishing due to the airline mistake so we only had three days to fish.

Day one we fished for only 4 hours in the Cancun lagoon and did not see many fish. The boys fed one and stuck 2 tarpon that evening. No jumps.

The next day we travelled to Isla Blanca and it was tough fishing there too. The wind was blowing at least 15 mph and we saw very few fish. By Noon I decided we better change gears and get some fish for the boys before they lose their attention. We fished for barracuda on spinning gear the last hour of the trip and they did very well. Michael landed the biggest at 10 pounds but Matthew got a good one at around 6 pounds. Together they landed 5 barracuda and lost as many.

The last day we fished the lagoon again in Cancun and it started out VERY slow. We didn’t see a fish for 2 hours but then we drifted slowly into a protected small lagoon and noticed some tarpon rolling near the mangroves. This is when all the chaos started!

Matthew hooked one immediately but lost it because he did not strip strike the fish. It was now Michael’s turn. The same thing happened, hooked and lost due to not strip striking. Turns out that this would be the exact same scenario for the next hour! The fish would eat the fly and the boys would continuously trout set and not strip strike so all the fish were lost. By the time we got to fish # 16, Michael hooked the fish and gave a half hearted strip strike but this time the fish stayed on and lo and behold he landed his first ever tarpon! As I unhooked the fish, I noticed the fish was hooked on the top of the the tongue which is the softest part of the fish’s mouth. Basically Michael got LUCKY! In that one small lagoon the boys went 1 for 16! They just could not perform the strip strike because all their fishing life they have been setting the hook by lifting the rod. Apparently a habit that was too hard to break.

After the fishing died down there, we left for open water and it was Matthew’s turn on the deck. We saw rolling tarpon again and Matthew got a good shot at one. We again reminded him to strip strike. He made the cast and the fish came over to the fly and followed it for a few feet then decided to EAT IT! As you may have already guessed, Matthew raised the rod tip as if he was fishing for trout and stuck the tarpon momentarily before the fish swam off on it’s own accord. Matthew felt terrible, he knew what he had just done and he knew that was was probably his last shot for the trip.

So we ended that day 1 for 17. The good news is that we got lots of chances for tarpon and the boys got to see what tarpon fishing is all about. The bad news is Matthew did not land a tarpon and they need to work on their strip striking.

For me it was such a great feeling to see the boys get so excited about tarpon fishing. They said they got really nervous when stripping the fly in when they knew the tarpon were there. I told them that I’ve fished many days for tarpon and that nervous feeling NEVER goes away.

Overall a very fun and short trip to Cancun. I would do it again in a heartbeat. Great experience for the kids and lots of things for the kids to do after the daily fishing is over. 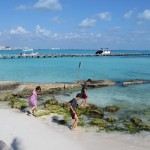 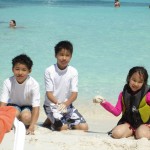 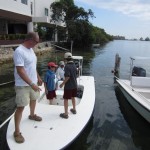 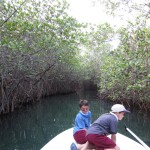 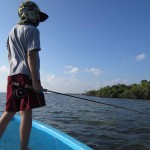 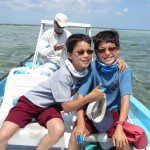 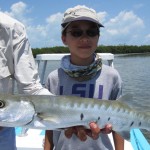 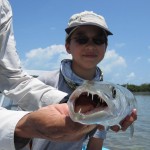 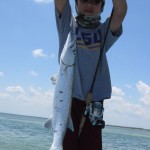 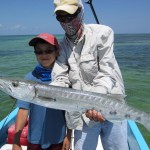 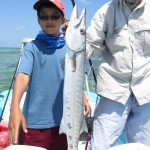 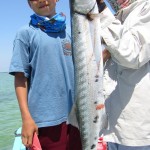 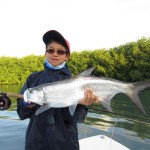 1 Response to The Cancun Chronicles